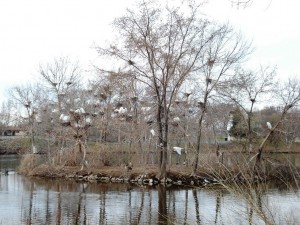 We drove to Fergus Falls yesterday, where I was delighted to find a common egret rookery in “full bloom.” The tiny offshore island in the small city park lake was loaded with nesting egrets. I’d seen a blue heron rookery in my home turf years ago, but this was my first egret rookery sighting. The elegant-looking, pure white birds seemed ungainly tree nesters — I’d assumed they would prefer a nice single-egret nest, something with a water view and a few neighbors at a respectable distance. Perhaps they nest in trees due to their lack of camouflage. A nesting white egret would be easy pickings along a grassy green or rush-lined shore.

As I watched the egrets and a few Canada geese meandering greedily around the shore looking for handouts, I pondered a few avian habits that I could take to heart, as well. 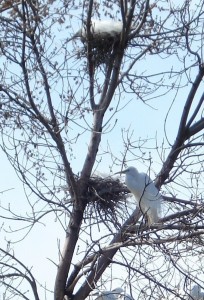 They thrive while living in community with other egrets. I like that about the egret rookery “neighborhood.” There is safety in numbers, they don’t have to go far to enjoy a cup of coffee with a friend, and (as my husband said), maybe they can help each other out with babysitting. 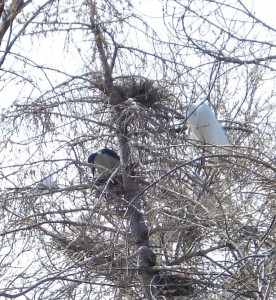 Even though the rookery appeared to be filled entirely with egrets, on closer inspection, we found an interloper of sorts. “Find what is different in this picture,” revealed a black-crowned night heron on its nest, nestled amidst the egrets. Its black-and-white markings stood out against the white-feathered egrets. The egrets didn’t seem to mind. Perhaps it’s a lesson for us — when the “other” is different, learn how to live together and get along. 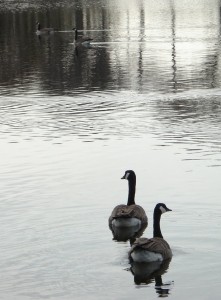 Most of the Canada geese drifted by in pairs. They mate for life and when I see one flying solo, I wonder if it has lost its mate permanently, or is just flying to catch up with its spouse. It’s the avian version of: “In sickness & in health, for better or worse, till death do us part.” After 32 years of marriage, I have gone through many challenges and they were borne more easily with my husband/best friend at my side.

Pondering avian life along the shores of God’s Country . . .