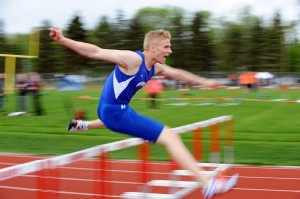 It’s early spring; the snow is still a foot deep and the first high school track meet is being held indoors at St. Cloud State’s track-and-field house. I rise before dawn on Saturday morning to drive our teenage son to school to catch the team bus, then return home to finish packing his sandwich, sports drink and water bottle. Making my quantum leap to the younger end of the offspring spectrum, I get our toddler out of bed. Thirty minutes later, changed, fed and with his diaper bag and accoutrements packed, I drop off my pint-sized son at Grandma’s house. (I once enjoyed the distinction of having one child in driver’s training and one in toilet training at the same time.)

After a leisurely drive, sans toddler-speak from the back seat and without the usual doling out of grahams and juice boxes, I reach the college. I find a parking place and join the other confused parents trying to locate the right door to the magic kingdom of the field house observation deck. Eight-thirty a.m. — right on time. A muffled speaker announces, “First call for . . . first call for mmfbggchk events.”

My son spots me and nonchalantly makes his way over to retrieve his sandwich and tell me about his events. We stand like government informants — spies sharing top secrets — side by side, looking straight ahead, making little eye contact. He’s glad I came, but true to the teenage code, won’t let it show.

“Second call for boys mfpgchtsxyz,” resounds across the ceiling’s steel gridwork and bounces between ventilation ducts.

My runner departs for the floor, striding tall and sure like a young gladiator entering the ring. Only I know his silent insecurities, unseen moles, preference for boxers over briefs. I am privy to his private life, but only when allowed entrance.

“Final call for girls and boys zxwmctch .” I have four (or is it five?) events to wait. I get out a pen and make a stroke for “one” on the corner of my magazine page. The scrambled loudspeaker merely moves things along — intelligible only to the athletes on the arena’s floor. It can’t be trusted.

My mind wanders ahead to the upcoming outdoor meets — a true Minnesota endurance test. Heavy warm-ups are worn over running silks, along with hats and mittens, and parents huddle for warmth on cold metal bleachers or cluster together along the finish-line fence, wrapped in tattered patchwork quilts kept in the trunk for just this purpose. When the contestants strip off their outer gear prior to their events, the mere sight of the wind-whipped gooseflesh of the runners stamping at the starting line makes me shiver within the bulk of my down jacket.

Peering across an outdoor track crowded with a rainbow of school colors makes it slightly more difficult, but not impossible, to spot my son under his warm-up layers. I pick him out by the swing of a gangly arm, the angle of his cocked head as he talks to a teammate. Though I’ve studied him all his life, it still surprises me — and scares him — how well I know my son.

“Second call for ctchxspbcd.” I realize I’ve lost track of the order of events. I scan the starting line — boys and girls are running together — the number sign at the finish soon displays a huge “seven.” An eight-lap event, this will be a longer wait.

He didn’t get his athletic bent from me. I spent high school Saturdays in dresses, good shoes, and pantyhose, traveling to speech tournaments. I delivered serious prose from double-spaced, typewritten pages that had been stapled to sheets of black construction paper — or nonoriginal oratory, the conclusion hastily revised and committed to memory that morning in the school station wagon on the ride up. No scripts were allowed in that event.

I once competed against a boy who had chosen the same dramatic reading: ” Silent Snow, Secret Snow” by Conrad Aiken. My opponent’s editing of the piece differed from the parts I’d chosen. When it was my turn, I looked fearlessly into his eyes and delivered my introduction. I only appeared small and nonthreatening — my speech coach had bequeathed me with the same tools and tactics that are wielded in the mind game of running.

“Third and final call for cbschtxzqr.”

My son stretches at the starting line, eager to race. I wonder what is going through his mind. I wish I could transfer his nervousness to myself — letting him race unfettered, free to do his best. I can only clench my hands in silent prayer, send victorious thoughts and holler encouragement (“Keep your pace — go, go — don’t let up!”) when he passes in front of me. He says he never hears me, but I yell anyway.

He finished second — it was a good run. I pick up my things and head out to the car; the other parents do the same. Each race seems harder — for me, not him. I know the day is coming when he will run for the last time and my job will be finished.

Until the next child begins to run.