A Universal Rule of Parenting 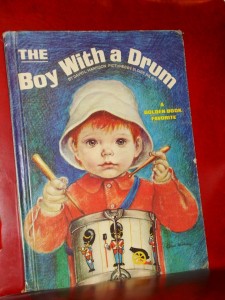 I always said I’d never let my youngest son do two things: play hockey and play drums. So far, I’ve raised a basketball player, so the winter sport is a given. The drum is a different story. It started out with band tryouts where he was told he could choose any instrument he wanted, due to innate rhythm from playing three years of piano. Guess what he had his heart set on?

After purchasing one snare drum and several months of lessons later — he wasn’t too bad. A couple of years ago, Target had a super sale and the starter drum set was 75 percent off. I could see son’s puppy-dog look and he wasn’t even with me. I caved in and bought it. Although the set was way too small, it satisfied the drummer’s need to bang on more than one surface at a time. Remember the days of cake pans and wooden spoons on the kitchen floor? It’s kind of the same thing only louder and somewhat more organized.

I recently came across one of his favorite books — one that I read to him countless times when he was little: The Boy with a Drum. I have no one to blame but myself for his instrument choice.

And now he has graduated to a full-size trap set. This confirms one of the Universal Rules of Parenting: Never say “never.”