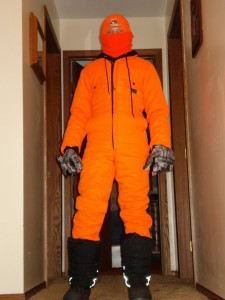 I know why the CBS Survivor television show will never tape its series out in my “neck of the woods.” Used to a steady diet of skimpy bikini-clad women and shirtless men in a tropical setting, the audience would never tune in to watch castaways bundled up in parkas, pack boots, mufflers, gloves, and stocking hats.

What would they do for challenges? Would the contestants stand on iceblocks and the last one to plunge into the snowbank wins? Or mush a sled dog team around a forested path—the first one to the finish line takes home, not an SUV or Corvette, but a snowmobile? Perhaps the survivors could drop a fish line through a hole in a fish house and try to catch enough crappies [translate: small panfish] to feed the shivering tribe. The first challenge is definitely going to be for the prize of fire. The losers would be permitted to perform camp chores for the winners to catch a few errant waves of warmth, lest anyone suffer frostbite on national television and give a black eye to the good name of reality TV.

If you really want to talk survival—place them all in a couple of snow caves. But then again, maybe the ratings would go up. Much more survivor “cuddling” would take place and the audience would jam the Survivor chatroom with speculation on what is really going on in those zipped-together, down sleeping bags.

The tribe has spoken. Brrrrr.